Top
0 shares
This post may include affiliate links. See our full disclosure. 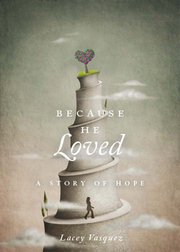 This book is very dear to my heart for many reasons. The first being, that my brother’s wife, my beautiful sister-in-law, lost her first fiance in the Iraq war. But God, through His glorious love, healing, and mercy showed her a new way of living and loving again. And as a result, my brother has a beautiful wife who is soon to birth their first child. Secondly, the fact that as a soldiers wife, the dangers of war are something we deal with all the time during these long deployments our husbands must serve. My husband is currently serving his 5th year long combat tour since 2004. And last, but not least, this book shows the mighty restoration power of a mighty God whom we are able to love, because He loved us first!


Because He Loved: A Story of Hope is a sad but beautiful portrayal of a real life story of God giving beauty for ashes in the life of Lacey Vasquez. Lacey, being a native Hawaiian had seen her fair share of soldiers coming and going from her island. Many of her friends had dated and married soldiers and Lacey, who at the time was studying at the University of Hawaii, had decided that marrying a military man was not for her.

Then entered Stephen, a Texan with a smile like the sun and a heart after Jesus. Lacey knew right away there was something different with this man who was a United States Marine. Lacey decided to go where her heart was leading her, and it was with Stephen. After a beautiful courtship, the two of them knew they wanted to spend the rest of their lives together.

On September 11, 2006, Lacey and Stephen said good-bye as he left on his second deployment to Iraq; not knowing this good-bye was forever. Throughout the next 3 months there were letters, phone calls, and emails exchanged letting one another know of the love they had for each other and for God. Then on December 24, 2006, Stephen was killed by an IED.

The rest of Lacey’s story is one of healing, hope, and restoration. A story that I know you will love to read as it will give you a greater perspective to appreciate the life you have in the here and now.

You can visit Lacey and learn more about her story on Facebook.