Marriage, Family, & Homeschooling in the Military {Part 4} Top
0 shares
This post may include affiliate links. See our full disclosure.

Boy, we were we in for a HUGE surprise upon Michael’s return from Afghanistan. First, before I forget to mention this, by the time I was three months pregnant with our son, Prince Charming, my husband had his first AND second vasectomies while deployed to Afghanistan. Well, guess what? Neither his first nor second vasectomy worked! Just two days after my husband’s return home from deployment – I became pregnant with Little Caveman – our vasectomy baby! I was so happy, but NOT surprised, when I found out I was pregnant. Let me explain.

There has only been ONE TIME that my husband has asked me to do anything that I did not want to do during our marriage. It was when he asked me for my permission to have a vasectomy. To be quite honest, I was hurt. We had discussed having another child – and for some reason – after we had Prince Charming my husband was seemingly changing his mind. The Army doctor required me to write a letter stating my consent to this surgery. At the time, we were stationed at Fort Bragg and the wait list for a vasectomy was already 3 months long. The longer it took me to write the letter, the more backed up the list became. I prayed and prayed and cried to out to God as I knew that we were not finished having children. It was only a few days after he asked me that the Lord gave me this answer, “Submit to your husbands request to have a vasectomy, and I will honor you with another son.” WHAT?!? Another son? Only God could know the desire in my heart for another son – so that evening I wrote the letter. A few months later the surgery was performed while my husband was deployed in Afghanistan. Yes, they do perform vasectomies overseas while the guys are deployed….shocking, I know.

Once Michael found out that his 1st vasectomy didn’t work, a few months later (on the same year long deployment in Afghanistan) he had another. It was almost as if my heart was being ripped out of my chest when I found all of this information out. I thought, “well if he gets another one, how on earth will I get pregnant?” But it was with another whisper in my ear that the Lord reconfirmed His promise to me. Then I wept and just laid my concerns at His feet. The rest of the deployment seemed to just fly by, and before I knew it – the other half of my heart was home. And I was pregnant.

Homeschooling at this time was very difficult for me. I found myself having a different type of pregnancy with Little Caveman – I was sick all the time and had no energy. It was very hard to homeschool Princess and keep up with Prince Charming who was only a baby himself. But I was determined to do it. And I did. Our newest blessing came forth the following October (2008) and it was one of the greatest AND scariest days of my life. Great because our blessing came, scary because they took him to the NICU and I had no idea why. I didn’t even get to touch my baby. I was so sad it is indescribable. It ended up that our little boy was very sick when he was born. He had pneumonia and a lot of fluid in his lungs. I could not touch him (they said touch would overstimulate him) nor breastfeed him for 4 days! It was tough for me being in that hospital bed and room all alone, knowing my baby was no longer in my belly. I was grateful he was alive, but this is something that is only understood if it happens to you. To top it all off, my husband couldn’t spend the night with me because he had to stay with our other children. It was a rough patch in my life for sure. But God once again pulled me through. It was with much joy that we brought our Little Caveman home 10 days after his entrance into this world!

Big Sis with baby boy #2 in the NICU 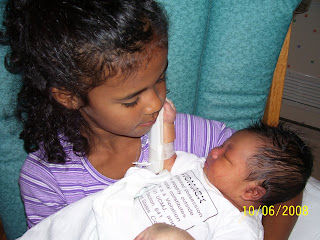 In addition to the NICU experience, I had some major complications after the birth and had a very rough recovery. This was another obstacle that our family overcame through prayer and leaning on Jesus. BUT, through this process, due to the overwhelming recovery, after MUCH prayer, and with much heartbreak we put Princess into the public school near our house to finish out her 2nd grade year. It might sound strange to some, but that was one of the most difficult decisions I have ever had to make in my life. In my natural mind it didn’t make much sense to me to do this, but it gave me peace in my heart.

In hindsight I now understand why God had us go through that time. The major reason so was that Prince Charming, who ended up becoming the middle child, would have some much needed one-on-one time with mama. He would have been lost in the shuffle had Princess not gone to the public school near our home for those two LONG months. I would have been giving most of my time to the “new” baby and schooling Princess – where would he fit in? But rather than have my son go through the heartbreak, God provided a way for his “identity” to be established in our family as well as giving him the confidence in where he stood with me. So grateful for a sovereign God who always has our best interest at heart!